Posted on November 25, 2013 Categories: Uncategorized No comments yet 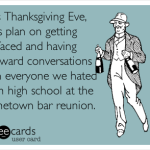 I spent my Thanksgiving Eve at my parent’s place prepping food because A.) I don’t want to hook up with people from out of town B.) I don’t have an everlasting crush on anyone from high school but if that you’re thing…

THANKSGIVING EVE: BULL ROAST AT POWER PLANT LIVE!
For $20 you get to eat a bunch of meat and drink all the check alcohol you want for several hours. If this was anywhere but Power Plant Live! I’d be down. The food starts at 7 but open bar doesn’t start til 8 so you can get in a good base, grab as many drinks as you can before the lines start building up and get out of there by 10 to go to…

THANKSGIVING EVE PARTY AT METRO GALLERY FEAT. SPANK ROCK AT METRO GALLERY
If you’re tryna get your twerk on. Like, actual twerking, not whatever the hell Miley’s been doing, then head over to Metro Gallery. I’m pretty sure it’s gonna get sloppy and lucky for you, chances are no one from your high school will be there to judge you.

THANKSGIVING EVE WITH THE CHARM CITY DEVILS & CHILD’S PLAY AT SOUNDSTAGE
For those looking to get real “Bawlmer, Hon” and to see the people from high school that popped out a kid a two during or directly after school, this would be a prime location.

OR JUST CHECK OUT ANY OF THESE SHOWS ON THANKSGIVING EVE…

BRING A DATE?
Unless your intention is to make someone jealous from high school… don’t. It’s no fun to catch up with old friends with someone that doesn’t get your inside jokes, not to mention it’ll squash prospect of the long awaited hookup.

FIND A DATE?
I think the best tactic here is, “Did you go to *insert school here*? Doesn’t matter if you recognize them or not, it’s just an easy enough question to break the ice.

There will be a lot of groups, so it may be difficult to separate someone from their group, either snatch them up early or exchange numbers and reconvene at the end of the night. If they’re from out of town and you didn’t hook up (and you actually want to see them again after Wednesday night) there’s always Friday night before they go back to whereever… If you meet someone from the area, well then, you missed the point.

THANKSGIVING HIP HOP NIGHT AT CLUB HIPPO
If come 8PM, you’re sick of your family, here’s a nice place to recover for the night. Many bars open by 9 to 10 on Thanksgiving so you can stumble your way around the city til something opens up.

TL;DR
Thanksgiving Eve is the worst night of the year, or… “Man, it’s going to be awkward when I see you again in four weeks during Christmas Break”