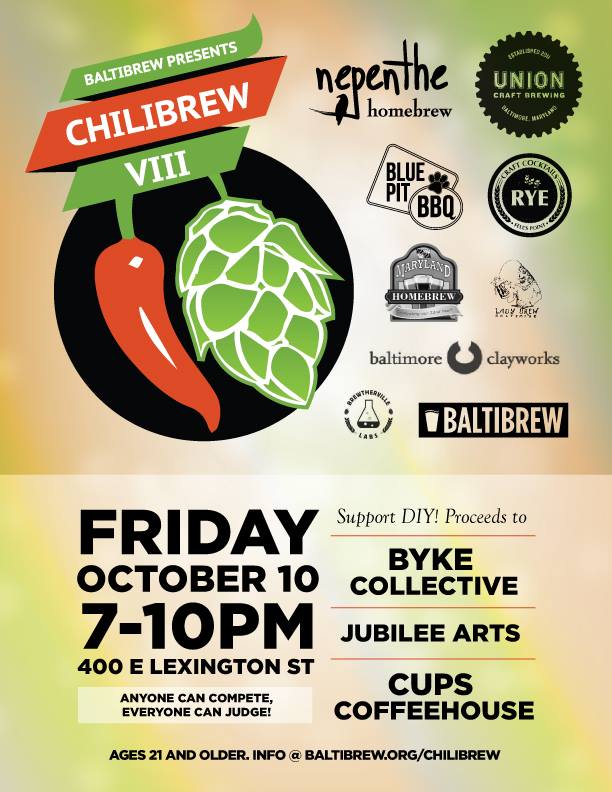 Tomorrow is Chilibrew! What is that, might you ask? It’s when your fellow Baltimoreans brew beer and make chili (maybe together) for your enjoyment! Competitor spots are all sold out but once these hard working people are done cooking you food and making you beer, you get to judge them! And it’s all you can drink.

Bring A Date?
Tickets will run you $25 each and includes entertainment, dinner and libations! Not a bad deal for a Friday night. Veggie chili is offered so you can bring your non-animal eaters to join in on the festivities. It’s located at that big church around the corner from what used to be Sonar (or for people that venture down there in the day time, by City Hall/Farmer’s Market), so it’s actually a fairly convenient walk from most of the city or just a circulator stop away. Go on a nice little walk to shave off some calories before drinking a gallon of beer. Afterwards, you could strategically avoid the Baltimore Street strip clubs (unless you’re into that sort of thing) and walk the harbor.

Find A Date?
Last year, there were 60 submissions. You could start there, talking to the nervous contenders. People like you more then you let them talk about themselves and I’m sure they’ll gladly tell you every step of their recipe making process. In the end, even if you don’t get a date, you get a good recipe out of it!

Want to give the contenders their space? Well, thankfully there are a bunch of other people there eating and drinking the exact same thing as you! So you have a built in conversation starter. Ask them what their favorite chili/drink has been of the night, then compare notes.

You’ll be in the heart of downtown Baltimore and there’s a show at Sidebar that you may or may not want to pay a cover for, so offer to split an Uber or if you biked (which, of course you did), bike together to the next location of the night. Headed North to Mount Vernon would be easiest. If you’re like Taylor Swift and feeling 22, head on over to Power Plant Live! Angels Rock Bar is having a Pre-Walking Dead party, obviously…

TL;DR
Chili, beer and that part of downtown Baltimore that is “quiet, almost too quiet” in the middle of the night.