Posted on August 16, 2013 Categories: Uncategorized No comments yet 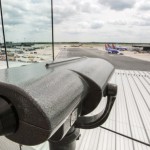 Bring A Date?
Don’t bother with airport parking when you can take the light rail out of the city, or if you’re feeling ambitious, you can bike from the city to the airport which will take about an 75 minutes. If you’re not quite up to that, there’s details on parking or taking the light rail directly to the BWI Trail to still get a work out in before you head to the Observation Deck.

The Observation Deck just reopened in July 2013. The newly renovated deck includes a several air craft exhibits, a 28 foot model rocket ship and a youth art gallery. Depending on how many kids are at the newly added playground, it may not be the quietest date but if you come at night, it could still be very romantic.

The OD now has a small plates & cocktail bar, Sky Azure, which is surprisingly reasonably priced! Grab a few drinks and some tacos before heading back into the city or get smashed enough to take an impromptu standby flight out of the country! (Don’t forget your passport!)

Find A Date?
I mean, most likely people hanging in the observation deck are from out of town and headed out of the area but that’s something you can figure out at the bar.

You don’t have to pass through security to get to the deck so you can quickly offer to be a tour guide to anyone that tickles your fancy ;).