Posted on October 3, 2013 Categories: Uncategorized No comments yet 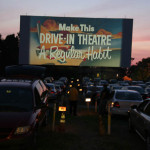 Bring A Date?
As you may know, I’m a sucker for the nostalgic, so a drive-in movie is right up my alley! I’ve had the privileged to go on a drive-in date. It’s incredibly romantic being all snuggled up under the blanket with someone you’re into watching a film under the stars. Only downside is attempting to get comfortable and see the screen takes a bit of effort especially in the colder months since you can’t keep the car running. October is the best because that’s normally when they’re showing the Oscar contenders.

There’s a lot of rules on the Bengie’s Drive-In site so to make it quick. The snack bar is pretty well stocked so take advantage of that unless you want to bring in alcohol, which will require you to buy an outside food/drink permit (keep in mind open container laws when leaving the theatre). Don’t suck and sneak food in, prices are already super cheap for THREE movies ($9). Speaking of price—it’s cash only & there’s no ATM so plan accordingly. Also, movies are only shown Friday through Sunday.

Find A Date?
This will be difficult because they have a no single rider rule most of the season but bring a nice wingman/woman and head over to the snack bar to see what you can rustle up.

TL;DR
Best opportunity to get frisky at a movie while still leaving your house.