Posted on February 25, 2015 Categories: Dating by the Numbers, Featured No comments yet 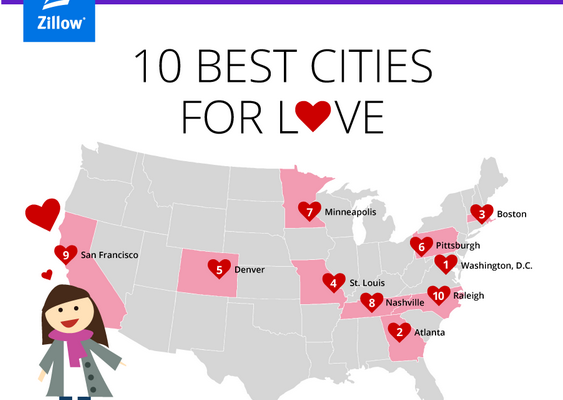 By Tali Wee of Zillow

You survived Valentine’s Day! Singles across the country, whether by choice or circumstance, have a tendency to feel a little lonely on Valentine’s Day. Enough catering to happy couples, it’s time to focus on the singles. Zillow did just that last week by releasing data about the best places for singles to find love in 2015.

For all those singles seeking partnership, review your top 10 list of relocation markets.

To arrive at these rankings, Zillow evaluated U.S. metros with at least 250,000 residents. Then, cities were ranked by their percentages of single residents. In this category, Baltimore outranked six of the top 10 places and tied with Boston at 68 percent single. Next, economists measured the percentage of singles in each area who recently moved to town.

All 10 cities had greater percentages of new singles than Baltimore (5.5 percent). For instance, Washington, DC had 8.4 percent new singles, Atlanta had 9.5 percent and Boston had 10.1 percent. This metric suggests each ranked locale has more inventory of singles to meet.

Rankings also included the total number of date spots per capita. Baltimore had 27 potential date spots per 10,000 people, including restaurants, bars, coffee shops and parks. Nine of the 10 ranked cities had more date spots per capita than Baltimore – one tied. Lastly, Zillow looked at the income of singles in each city, subtracted their median rent costs to establish their median disposable incomes. Together, these numbers suggest singles can find places to go on dates and afford them. Baltimore has higher disposable income than four of the ranked cities, at $15,893, though the other factors pushed Baltimore out of the top 10.

Regardless, finding singles ready to date in Baltimore should be much easier than the majority of other U.S. cities. Now that Valentine’s Day has passed, take action to find yourself a companion for romantic holidays to come.

For more information, check out the full research here. 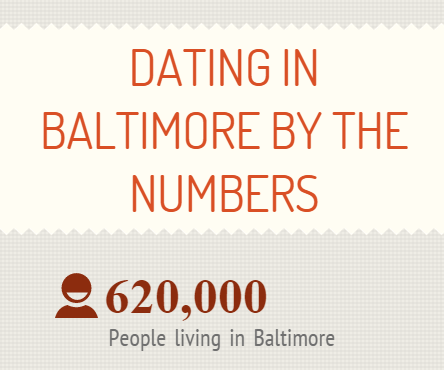 Dating in Baltimore by the Numbers